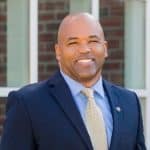 William was born in Oklahoma City, Oklahoma the son of Gwendolyn and William Wallace Sr. William has been married to his wife Tracey for 32 years, they have three daughters and three grandsons.

William enlisted in the US Army in 1990 as a PV1. William served for 9 years in Field Artillery and later decided to pursue a career in Special Operations. William tried out for and was selected in October 1999. After completing the Q-Course William was assigned to 3rd Special Forces Group Airborne as an 18E; Special Forces Communications Sergeant. After being assigned to 3rd SFG(A) William served in various positions and completed numerous schools. Ranger School, ODA 333 Senior 18E, Team Sergeant of ODA 352/3222, Troop 2 Troop-SGM within B Company, 2nd Bn (CIF), Team Sergeant of ODA 3422, and Company 1SG HHC 4 Bn. During his 26 years of active duty William conducted JCETS within the 3rd SFG(A) AOR and conducted multiple combat deployments in Saudi Arabia, Iraq, and Afghanistan.

After retiring from active duty William continued his service within ARSOF by accepting a position within the USASOC G9 as a capabilities analyst. As a DA Civilian, William has served as a XO for the USASOC DtCG, Deputy Director in the USASOC Safety office and currently as the USASOC Secretary of the General Staff (SGS). In total, to date, William has proudly served for 32 years.

William holds a Master of Arts in Religion and a Master of Arts in Apologetics from Southern Evangelical Seminary and is currently working on his doctorate at the same institution. William is an adjunct faculty member at Carolina College of Biblical Studies teaching undergrad students. William serves his local community on the HOA board and at his local Church as an associate minister.