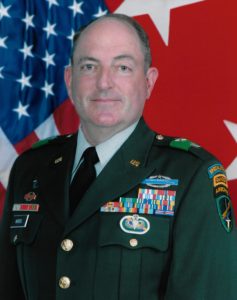 Major General David A. Morris, U.S. Army (Ret.) is an independent advisor and consultant in the fields of defense, intelligence and leadership.  He is on the Board of Advisors of Adhesys Medical, Inc., Bramer Group, LLC, United Water Federal Services and Stealth Performance Communication.  From 2014-2016 Morris also served as the volunteer Chairman of the Board for the Green Beret Foundation, a non-profit organization supporting Special Forces Soldiers and their families.

Commissioned in 1975 from the U.S. Military Academy at West Point, Morris subsequently served in Infantry and Special Forces Assignments, including tours in the war in El Salvador, duty as the operations officer for an in-extremis force, and as a Special Forces instructor.

Morris was promoted to Brigadier General and assigned as the Deputy Commanding General of the US Army Civil Affairs and Psychological Operations Command (Airborne) (USACAPOC (A)) in 2005.  In 2007, he was returned to active duty, promoted to Major General and assumed command of USACAPOC (A).  In 2009, Morris was assigned to US Joint Forces Command (USJFCOM), where he served as the Deputy Director for the Joint Capability Development Directorate (J8) and later as the Director of the Joint Irregular Warfare Center, which included duties as the Department of Defense Executive Agent for Joint Urban Operations.  Morris retired with over 36 years of active and reserve service, with multiple combat deployments in Latin America and the Middle East as well as support to operations in Bosnia.

As a civilian, Morris served in the intelligence community including the Central Intelligence Agency, the Intelligence Directorates of USSOCOM, US European Command and USJFCOM, as well as the Joint Analysis Center, RAF Molesworth, UK.  He retired as a member of the Defense Intelligence Senior Executive Service in 2008.  His specialties included Human Resources Intelligence, strategic planning, budgeting and programming, and SOF intelligence architectures.

Major General Morris is regarded as a Subject Matter Expert in both Special Operations and Intelligence.  From 2012-2014, he served as a Vice President at DynCorp International, focusing on Special Operations and Intelligence strategies and business development.  He was the Senior National Security Advisor to James Madison University as well as an adjunct professor with the American Public University System, teaching graduate courses related to Special Operations and Joint Warfare.  Morris has participated in “Future of SOF” roundtable discussions and was a featured speaker at the Annual “SOF Summit,” as well as a guest lecturer at the Naval Post Graduate School.  In 2013, he was a featured speaker at a NATO logistics conference, where he presented an operator’s perspective.  He was the Keynote speaker of the 2013 Citadel Security and Intelligence Conference.  He has thrice served as the Master of Ceremonies for the Army Birthday Gala in New York City.

Major General Morris holds a Master of Public Administration degree with a triple major from Golden Gate University and is also a graduate of the US Army Command and General Staff College and the US Army War College.  His most significant awards include the Army Distinguished Service Medal, the Defense Superior Service Medal with Oak Leaf Cluster, the Legion of Merit, the Bronze Star, the Defense Meritorious Service Medal, the Joint Service Commendation Medal with Oak Leaf Cluster, the Army Commendation Medal, the Combat Infantryman Badge with Star, Special Forces Tab, Ranger Tab, Master Parachutist Badge, the Republic of Columbia Lancero Badge (Ranger), and the jump wings of nine foreign nations.  He also received the 2009 John H. Hilldring Award of the Civil Affairs Association.  In 2013, he was inducted into the Civil Affairs Hall of Fame as a distinguished member of the regiment.