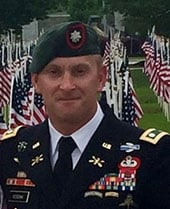 LTC (Ret.) Christian Sessoms is a 1999 graduate of The Citadel (The Military College of South Carolina) in Charleston, South Carolina. Commissioned as an Infantry Officer, in his first assignment he served as a Rifle Platoon Leader and Anti-Armor Platoon Leader in the 1st of the 504th Parachute Infantry Regiment, 82nd Airborne Division, Fort Bragg, NC.  He also served as an Assistant Operations Officer and Enroute Communications Platoon Leader in the 82nd Signal Battalion.  He went on to complete the Special Forces Qualification Course in 2004.

Following the Q-Course, his first assignment was to the 3rd Special Forces Group (Airborne) at Fort Bragg, NC, where he served as Executive Officer of Charlie Company, 2nd Battalion, Commander Operational Detachment – Alpha 364, and Commander Headquarters and Support Company; deploying to Afghanistan in support of Operation ENDURING FREEDOM in all three positions, and to Tajikistan for a Joint Combined Exercise for Training.

He then served as an Assignments Officer at Special Forces Branch, U.S. Army Human Resources Command. Following that assignment, he earned his Master’s of Science in Defense Analysis: Terrorist Operations and Financing at the Naval Postgraduate School in Monterey, CA.  He also completed his Command and General Staff College requirements through the Naval War College while in Monterey.