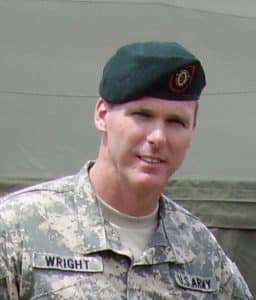 Command Sergeant Major Wright entered the United States Army in 1984 and attended One-Station Unit Training (OSUT) at Fort Benning, Georgia where he was trained as an infantryman.  He completed tours with the 3rd US INF (The Old Guard), Fort Meyer, VA and A Co, 4th Battalion, 325th INF Regiment (ABN), Fort Bragg, NC before graduating the Special Forces Qualification Course as a weapons sergeant.  CSM Wright spent 10 years in A Co, 1st Battalion, 3rd Special Forces Group prior to serving as the Senior Career Advisor, CMF 18 at the Human Resources Command in Alexandria, VA.  After graduating the Sergeants Major Academy he returned to Fort Bragg as the Sergeant Major for B Co, 3rd Battalion 3rd Special Forces Group where he led the AOB during two tours to Afghanistan and one to Iraq.  He then served as the “Robin Sage” Company Sergeant Major at Camp MacKall, NC under the Special Warfare Training Center.  In 2007, he was appointed to Command Sergeant Major and served as the CSM for 3rd Battalion, 7th Special Forces Group and as the Special Operations Task Force-East CSM in Bagram, Afghanistan.  He subsequently served as CSM for 3rd Special Forces Group and the Combined Joint Special Operations Task Forces-Afghanistan in Bagram, Afghanistan.  In 2011, he was selected as a Nominative CSM and served at the Senior Enlisted Advisor for Special Operations Command Africa followed by a tour to Kabul, Afghanistan where he served as the Senior Enlisted Advisor for the Special Operations Joint Task Force-Afghanistan.  In 2013, he was selected to serve as the CSM for Fort Leavenworth and the U.S. Army Combined Arms Center at Fort Leavenworth, KS prior to his selection as the 15th Senior Enlisted Advisor of the Joint Special Operations Command, Fort Bragg, NC.  In April, 2017 CSM Wright retired after 33-years of active federal service.  He currently serves as the Defense Threat Reduction Agency-Joint Improvised-Threat Defeat (DTRA-JD) Operations Integrator to USASOC.

CSM Wright’s military schooling includes all levels of NCOES through the United States Army Sergeants Major Academy.  He is a graduate of the Center for Strategic Studies Senior Leader Seminar, the Army’s Senior Leader Development Program levels 1 and 2, the Joint Force Keystone Course and holds a Bachelor of Science Degree in Psychology from Park University (MCL).  He is a graduate of Ranger School (8-88), Special Forces Operations and Intelligence Course (02-93) and Military Freefall Jumpmaster Course (03-99).

CSM Wright is married to the former Tina Grace Martin and they celebrated their 33rd wedding anniversary this past summer are blessed to have two thriving children (twins); Dakota Wayne and Savannah Grace.