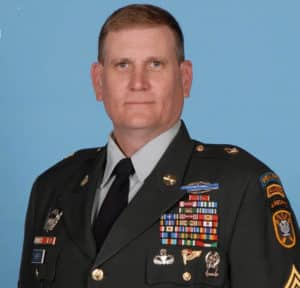 Command Sergeant Major (Retired) Brian Berry completed his military career in 2014 after more than 27 years. During his career he served in the infantry, filling positions of radio operator, team leader, squad leader and platoon sergeant. After completing the Special Forces selection course in 1992, he entered the SF qualification course and after graduating was assigned to 1st Battalion, 3rd Special Forces Group (Airborne). There he was assigned to SF ODAs 332 and 334 where he filled the positions of Senior Weapons Sergeant and Intelligence Sergeant. After a brief assignment to Special Forces Command as a theater Desk NCO he was assigned to 3rd Battalion, 3rd Special Forces Group where hews assigned as a company operations sergeant and later as an SFODA Team Sergeant. Upon completion of his team sergeant time he was assigned to USAJFKSWCS as a Field Team sergeant for Robin Sage, followed by assignment as the First Sergeant of A Company, 1st Bn, 1st SWTG(A). CSM (R) Berry graduated class 57 of the US Army’s Sergeants Major Academy in 2007 and was assigned as the Company Sergeant Major of B Company, 1st Bn, 1st SWTG(A). At the completion of that assignment CSM(R) Berry took the reigns as the CSM for the International Security Assistance Force-Special Operation Forces in Afghanistan (ISAF_SOF). During this time he was the senior enlisted advisor to Brigadier Generals from both the UK and Australia. After his year long assignment to ISAF-SOF, he returned home for a short stint as the Sergeant Major for the Deputy Chief of Staff/G8 USASOC and was later selected to be the CSM for 4th Bn, 1st SWTG(A) for his last 3 years of service.