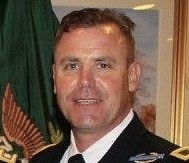 Colonel (Retired) Kelly’s assignments include service in the 10th Mountain Division at Fort Drum, New York in the 1/7th  Field Artillery, 10th Mountain Division as a Fire Support Officer, Battery XO, and Battalion Support Platoon Leader participating in Operation UPHOLD DEMOCRACY in Haiti.  From 1995 through 1996, he served in 2d BN, 75th Ranger Regiment as a Company Fire Support Officer.  In 1997, he attended the Special Forces Qualification Course and was assigned to B Co., 2d BN, 3d SFG(A) as Detachment Commander on Operational Detachment Alpha (ODA) 351.  In this position, he participated in numerous Joint Combined Exchange Training (JCET) to include a deployment in support of Operation JOINT FORGE in Bosnia as a Joint Commissioned Observer (JCO).  In 2000, Colonel (Retired) Kelly was given command of a specialty team (ODA 365) which conducted security surveys of US Government facilities OCONUS.  Immediately after the events of 9/11, Colonel (Retired) Kelly was then reassigned to B Co., 2d BN, 3d SFG(A) as an assault troop commander with the newly established CENTCOM Crisis Response Element (CRE) deploying to Qatar, Yemen, and Djibouti in support of Operation ENDURING FREEDOM and the Global War on Terror (GWOT).  In the fall of 2002, he was assigned as the 3d SFG(A) Assistant Operations Officer and deployed to Afghanistan in support of Operation ENDURING FREEDOM.  In 2004 he took command of B Co., 2d BN, 3d SFG(A) designated as the CENTCOM Commander’s In-Extremis Force.  While in command from 2004 through 2006, his unit trained and fought alongside the Iraqi Counter Terrorism Force in support of Operation IRAQI FREEDOM.  From 2006 until 2008, Colonel (Retired) Kelly commanded D Co., 2d BN, 1st SWTG(A) which is responsible for training USASOC Soldiers in Advanced Close Quarters Combat and Sniper operations.  In 2008 and 2009 Colonel (Retired) Kelly served as a Group Executive Officer and the United States Army Special Forces Command (Airborne) G3 Chief of Training.  From July 2010 through June 2012, he commanded 4th BN, 1st SWTG(A).  Following command, Colonel (Retired) Kelly served as the Combined Joint Special Operation Task Force – Afghanistan Operations Director (J3) from July 2012 -2013. Upon graduation from the US Army War College at Carlisle Barracks in July 2014, he was assigned as the Deputy Operations Group Commander for the Joint Readiness Training Center at Fort Polk, Louisiana.

Upon arrival back at Fort Bragg, North Carolina in June 2016, Colonel (Retired) Kelly assumed the duties of the 1st Special Forces Command (Airborne) Director of Operations and Chief of Staff until his retirement from active service in December 2017.  He currently continues to work for 1st Special Forces Command as an exercise planner and is the owner of the Kelly Consulting Group LLC which is a defense and exercise consulting service.

Colonel (retired) Kelly is married to the former Gretchen L. Thompson from Louisville, Kentucky and they have two daughters; Logan and Tatum.